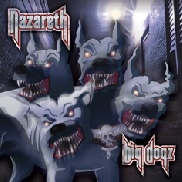 Nazareth Return With ‘Big Dogz’ On May 10th

Eagle Rock Entertainment, through earMusic, is proud to announce the release of Big Dogz, the new studio album from legendary Scottish rockers Nazareth. The CD hits stores May 10, 2011.

Produced by guitar player Jimmy Murrison and sound wizard Yann Rouiller, the album’s production avoids the trappings of traditional polish in an effort to capture the challenging edge of classic rock’n’roll. Obviously, this is one band that has stuck to its guns not giving an inch for trends and fashion. Like Motorhead, AC/DC or The Ramones, their personal vision supercedes any inclination whatsoever to follow the pack. The result of this hard-headed singularity? Sixty million albums sold in a glorious 41-year career.

Nazareth has invested their time in finding the original sound and spirit of the ’70s, when rock bands expressed values and ideas only through their instruments, an amp and a mic. To this end, they’ve completed an album with nearly no overdubs or multiple takes, no vocal lines or solos adjusted through a computer. The new Nazareth album is what the band really is: four men who live rock music, recording together in the same room at the same time, showing what they really are, and what they really want. One of the purest diamonds of Rock music, Big Dogz, will surely join their previous albums No Mean City and Hair Of The Dog in the most representative episodes of a glorious history.

Founder member Pete Agnew says “They say you can’t teach an old dog new tricks, but having recorded the new Nazareth album Big Dogz, I don’t agree. We’ve got some tasty bones here! Our friends at earMusic offered us the opportunity to mark some new territory and the ‘Nazhounds’ are delighted to be back among their pack. We’re straining at the leash to tour this puppy. We reckon it’s bitchin’! So get ready, because in 2011 the Big Dogz gonna howl!!”