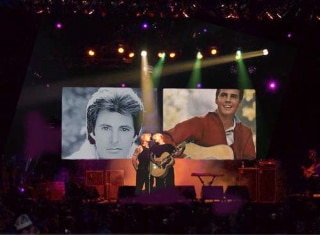 “We are so excited to be a part of the inaugural voyage of Oasis of the Seas,” enthuses Gunnar Nelson. “We look forward to taking the stage in the Opal Theater and bringing our show to the Entertainment Place neighborhood.”

“Gunnar and I are thrilled to be performing in this ‘floating city’ known as Oasis,” said Matthew Nelson. “It’s exciting to be a part of Royal Caribbean’s inaugural sailing of this amazing cruise ship.”

Matthew and Gunnar Nelson are the identical twin sons of Rock’n’Roll Hall of Famer Ricky Nelson, and grandsons of ’50s TV icons Ozzie & Harriet Nelson of the Nelson family — the only family in entertainment history with three generations of #1 hitmakers according to the Guinness Book of World Records. With their rock band NELSON, Matthew and Gunnar have (5) Five Top 40 Billboard hits, (4) Four #1 MTV videos and have sold over 4 million albums worldwide.

The Ricky Nelson Remembered show is a unique multi media tribute show featuring live music of Ricky Nelson’s hit songs (including “Hello Mary Lou”, “Travelin’ Man”, “Garden Party”) and never before seen footage of the NELSON family with interviews from celebrities influenced by Ricky Nelson. The show appeals to a wide audience and multiple generations and celebrates the life of America’s original ‘Teen Idol’. This year 2010 will mark the 25th anniversary of Rick Nelson’s passing in a tragic New Year’s Eve plane crash.

Royal Caribbean International’s Oasis of the Seas is the world’s largest and most revolutionary cruise ship at sea making her homeport in Fort Lauderdale, Florida. Matthew and Gunnar Nelson will be the first celebrity performers to take the Opal Theater stage on the ship’s inaugural 7-day cruise sailing December 5th