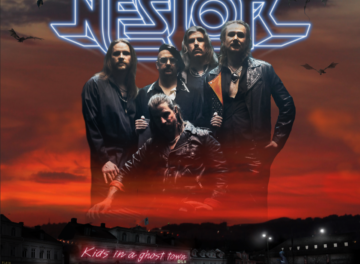 Swedish rockers Nestor consisting of Jonny Wemmenstedt on guitar, Tobias Gustavsson on lead vocals, Martin Frejinger on keyboards, Mattias Carlsson on drums and Marcus Åblad on bass will be re-releasing their debut album Kids In A Ghost Town via Napalm Records as a deluxe edition featuring three bonus tracks on September 30, 2022. Nestor‘s debut album finished at #20 on the Sleaze Roxx Readers’ Top 20 Albums of 2021. 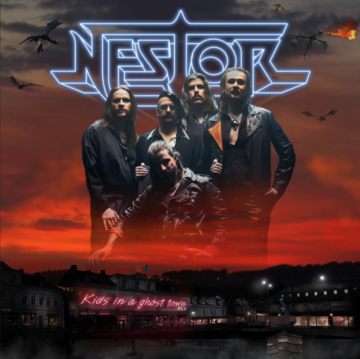 “The unanimously acclaimed debut album from Swedish nostalgic rockers Nestor is getting a re-release. After signing with Napalm Records earlier this year the band and label decided to give new life to the record, with new music and new cover art.

The deluxe edition, that will be released on digital, CD, vinyl and cassette includes the latest single “Signed In Blood” that was released this spring, a song based on a true friendship that can be traced back to the band’s humble beginnings in 1989, before the three decade long hiatus that lasted until their reformation and glorious return last year.

Two additional songs round out the enhanced track list. The somber and reflective “A Losing Game” contains so many key changes that it will bring tears of joy in the eyes of anyone that listens to it (even the guys in Ultravox)! And the cover version of “I Wanna Dance With Somebody”sounds like the perfect summer fling lovechild between Whitney and Van Halen!

A great album has become even greater! The deluxe version of “Kids In A Ghost Town” will be available on September 30th everywhere. Even in your Walkman!

Originally founded in the small town of Falköping, Sweden back in 1989 by five childhood friends, Nestor made a triumphant return after almost three decades of dormancy with their nostalgic 80s sounding rock. With this second chance at achieving their childhood dreams of becoming rock stars, the five guys in Nestor will not be wasting a single moment of this amazing ride!”