After unfortunately having to pull the plug on the summer 2020 tour dates due to the Covid-19 induced restrictions, The Stadium Tour featuring Mötley Crüe, Def Leppard, Poison and Joan Jett & The Blackhearts has announced tour dates for 2021. 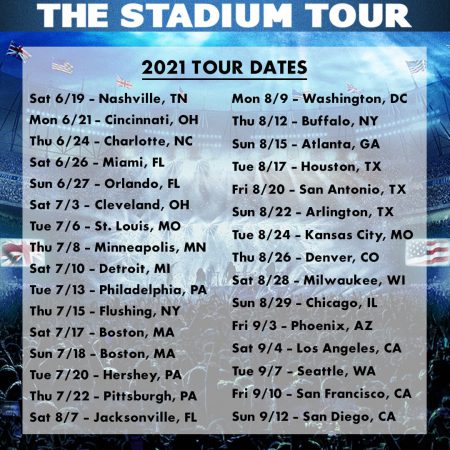 Sleaze Roxx stated the following in its review of Def Leppard‘s tour stop at the Molson Amphitheatre in Toronto, Ontario, Canada back in July 2015:

“With Pyromania and Hysteria — two Diamond selling certified records in a row under their belt — Def Leppard could simply do no wrong by playing songs from those stellar records. While I was shocked and even a little disgusted with Def Leppard‘s musical direction with Hysteria when it first came out in 1987, the record has certainly grown on me over the years and it helps that there were so many easy to sing along to singles that emanated from that album as well. Accordingly, I was even a little disappointed that Def Leppard did not play “Women” during the concert.

It would have been nice to hear some more tracks from High ‘N’ Dry other than “Let It Go”, the obligatory “Bringin’ On The Heartbreak” and the instrumental “Switch 625”. At the end of the day, I get why Def Leppard did not play some more obscure songs because quite frankly it was the hits that got the best crowd reaction and Def Leppardcertainly had tons of hits to play! My favorite Def Leppard tracks played on this night were not surprisingly the earlier era and heavier  Def Leppard songs such as “Rock! Rock! (Till You Drop)”, “Let It Go” and “Rock Of Ages”. Overall, Def Leppard turned back the clock on this night about twenty seven years and delivered exactly what the crowd wanted to hear!”

In terms of Poison‘s live performance at the same venue (now called the Budweiser Stage) in June 2018, Sleaze Roxx stated in its review:

“Overall, while I thought that Poison‘s set was a little on the short side (probably one hour and 15 minutes with three solo features), it was a lot of fun and it really felt like there was a great party atmosphere. In a nutshell, Poison brought the party to Toronto and made a usually uneventful Tuesday night feel like a raucous Saturday night. You can’t ask for anymore than that from any entertainer. I am definitely not waiting another ten years before I go see Poison play live again.”