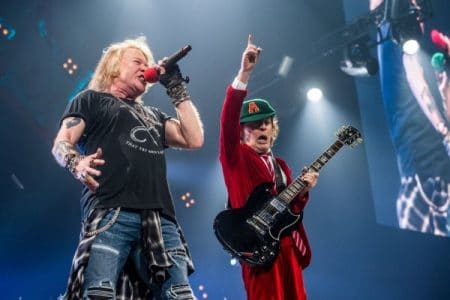 Once again, Noise 11 does not provide the source of its information but states (with slight edits): “With Gun[s] N’ Roses dates running through until September it is expected that the next AC/DC album with Axl Rose won’t be ready until 2018.”

Rumours of AC/DC continuing with Rose on vocals past the band’s Rock Or Bust tour have been circulating since back on September 20, 2016 when Brazilian journalist José Norberto Flesch announced via his Twitter account that Young would continue AC/DC with his nephew Stevie Young on guitar, Guns N’ Roses‘ frontman Axl Rose as lead vocalist and a bunch of hired musicians to fill out the band.