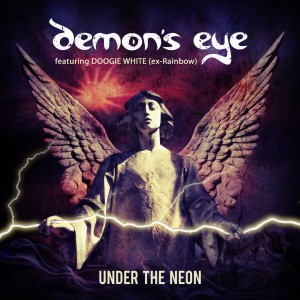 On September 18, 2015, Demon’s Eye released their second album Under The Neon, which features Doogie White, the former singer of Ritchie Blackmore’s Rainbow and the current lead vocalist with Michael Schenker’s Temple of Rock.

The band’s press release indicates: “Rock legends like Jon Lord and Ian Paice from Deep Purple had several concerts together with Demon’s Eye and were quite taken with their musicality and power. After building up a reputation as a Deep Purple Tribute Band, they established their name as an original band with their successful debut album The Stranger Within in 2011. With Under The Neon, Demon’s Eye have now released their second album, once again featuring Doogie White, former singer of Ritchie Blackmore’s Rainbow and current lead vocalist with Michael Schenker’s Temple of Rock.

Doogie White [states]: Under The Neon is a high energy album full of exciting and vibrant songs complimented with dynamic performances from everyone. I think it’s just great! Difficult 2nd album? Not at all. The band have breathed brand new life into their classic sound. Demon’s Eye play music that is based on the greatest era of rock music: the seventies. It‘s traditional British heavy rock music done by Germans… and a Scotsman (laughter). It’s for people who love that classic sound where bands experimented and explored with their music and delivered outstanding yet unpretentious musicianship. The wonderful thing is that the sound is classic and the approach is new and fresh. The songs are really brilliant, dynamic and varied. It‘s a style of music I enjoy and relate with and I try to make what I bring to the party as colorful, challenging and as triumphant as I can.”

Under The Neon will be available on CD in stores in Europe and digitally worldwide.