Sweet Savage frontman Joey C. Jones has a new album titled The Crabtree Sessions that is now available via the record label The DDR Music Group. 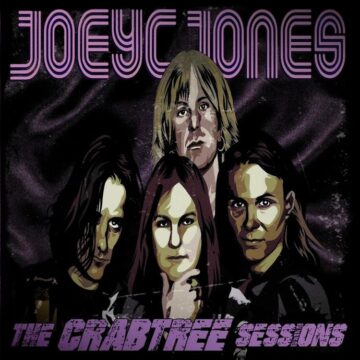 “Joey C. Jones and The DDR Music Group have teamed up for the fourth time to deliver another sonic assault to the masses.

Bringing his undeniable vocal abilities and front man extraordinaire personality to the fore front once again, Joey combines the best of his influences on ‘The Crabtree Sessions’ album. Weaving the Beatles, David Bowie and Alice In Chains into a web of sonic delight, that even the darkest of supernaturals would surely be proud of, there is no limit to where this album will take you.

Jones, Baird, Crow and Koudelka craft some serious chemistry that Joey truly believes is his best work to date…and that’s saying something when you’ve fronted Sweet Savage as well as The Gloryhounds! From the opening line “Do as I will, I serve no law”, Joey and the boys reek havoc throughout this well produced and well performed 18 track record.

Simply put if your a fan of Heavy Rock and especially Joey C. Jones, you will dig this album immensely.

This tracks on this CD has been digitally remastered, is officially licensed from the band and comes packaged in an 8 page booklet with a full set of lyrics. Get your copy exclusively at The DDR Music Group today.”