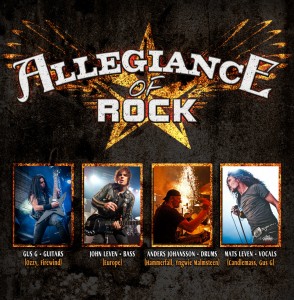 A new all star band has been formed which will include Ozzy Osbourne‘s guitarist Gus G and Europe bassist John Leven.

“The new Swedish supergroup ‘Allegiance Of Rock‘ is a collaboration consisting of Gus G (Ozzy, Firewind) – guitars, John Leven (Europe) – bass, Anders Johansson (Hammerfall, Yngwie Malmsteen) – drums and Mats Leven (Candlemass, Gus G) on vocals. This all star alliance will be united for the very first time at Stockholm Rocks Festival on May 7th, 2016 at Debaser Medis, Sweden. The band will be performing songs from the past, present and future of their own back catalogue and more. Prepare yourself for screaming guitars, thundering bass and drums and voices from another world.”