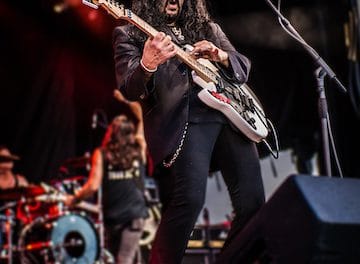 New Autograph lead guitarist Jimi Bell was recently interviewed by Rockin’ Interviews. Bell was asked about his audition with Ozzy Osbourne back in 1987 to which he replied (with slight edits):

“It was incredible. I was with Kramer Guitars, they were sponsoring me. I didn’t have a record deal, but I was signed with them because they really liked the way I played guitar. I got a phone call from Kramer Guitars and they said, ‘You have to be on a plane this afternoon, you’re gonna audition for Ozzy’. They had a promo pack of mine and they sent it out and Sharon 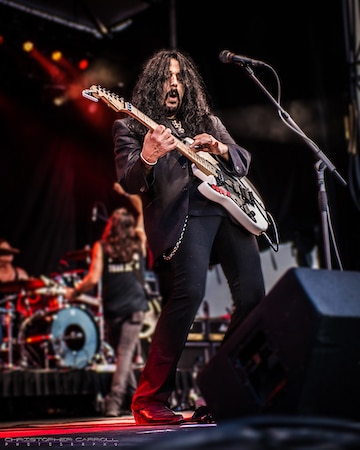 Osbourne loved it. Now of course they had already decided on Zakk (Wylde) for the gig but then they saw my promo pack and wanted to have me come out. So I flew out to L.A. and played with the drummer Randy Castillo and Phil Soussan first because Ozzy wasn’t about to sit through all the guitar players auditioning. When I auditioned, Sharon Osbourne was there to watch. The next day I played on this big soundstage with Ozzy and it went phenomenal, Ozzy really loved it and when I got done playing, they sat me down and said it was between me and Zakk. They took me out to dinner at a very fancy restaurant. Then after, Randy took me out to The Troubadour. After deciding to stay with Zakk, Sharon gave my promo pack to bassist Geezer Butler of Black Sabbath. At that point, I was flown to England to work with him.”

With respect to how he became a member of Autograph, Bell advised:

“I am good friends with Steve Lynch. We became friends through mutual respect as guitar players and we kept in touch through that. I played one show at the Cannery in Southbridge, MA with Maxx Explosion, which is BJ Zampa, Chris McCarvill (of Dokken), and myself, opened for Autograph. That’s where I met the rest of the guys. I went to see Autograph at Mohegan Sun afterwards and that’s how we became friends. When I saw that Steve made his official announcement that he left the band, I contacted Randy (Rand) and said, ‘I’m sure you’re getting bombarded with messages of people who want to play guitar for you, but I’m very interested in doing a gig’. He was all about it. What was supposed to be three songs they gave me, turned into 8 songs I learned on my own and that turned into alright well you can just do these next three gigs. Then I went to L.A. and had the whole set learned for rehearsals and after we played the first song, they knew I was going to be their guitar player. The next day they made the announcement. I love playing with them. I gotta be honest, I love the guys so much. I’m very very comfortable working with them onstage, it’s like I’ve been in the band for a very long time. I was very comfortable with those guys. The first show I played with Autograph in Virginia was incredible.”

You can read the rest of the interview with Jimi Bell at Rockin’ Interviews‘ website.