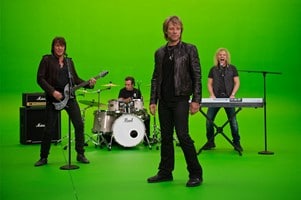 On January 7, 2013 Bon Jovi’s new single “Because We Can” will be released worldwide and available for download on iTunes. “Because We Can” is the lead single from the upcoming Bon Jovi album ‘What About Now’, due out in early 2013.

In the coming weeks Bon Jovi will be revealing more exclusives about the single and album that will bring the band closer to their fans than ever before, and will feature a special, never-before-seen multi-dimensional experience. Download the Bon Jovi app now at mobileroadie.com/apps/bonjovi to unlock a whole new world of Bon Jovi!

‘Bon Jovi Inside Out’, a concert documentary that premiered in movies theaters in late November, is also available through iTunes.

Recorded during a handful of sold-out shows at colossal venues — Madison Square Garden, London’s O2 Arena, and the grand opening of New Jersey’s New Meadowlands Stadium — ‘Bon Jovi Inside Out’ finds the band tearing through a set of handpicked fan favorites. The tunes encompass Bon Jovi’s career but offer a heavy dose of ‘Slippery When Wet’ sing-alongs like “Livin’ on a Prayer” and “Wanted Dead or Alive”.