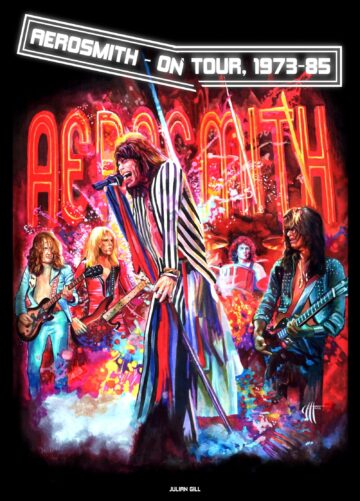 Aerosmith fans are in for a treat as a new book by Julian Gill titled Aerosmith On Tour: 1973-1985. The paperback edition consists of 612 pages and can be purchased via Amazon. You can also check out the website Aerosmith On Tour.

“Celebrating the 50th anniversary of the formation of the classic Aerosmith lineup — Steven Tyler, Joe Perry, Brad Whitford, Tom Hamilton, and Joey Kramer — a new book, Aerosmith On Tour: 1973-1985, exhaustively chronicles for the first time the band’s career on the road, from early gigs in high school auditoriums and ratty clubs to headlining arenas and stadiums. Written by Julian Gill, Aerosmith On Tour: 1973-1985 unveils its tale via local reviews, eyewitness reports, press accounts and interviews with key insiders.

You’ll join the “Bad Boys from Boston” as the band earns their stripes on the rock and roll battlefield the hard way opening for acts like The Kinks, Humble Pie and the Mahavishnu Orchestra, enjoying breakthrough success with albums Toys In The Attic and Rocks, imploding in the late ’70s, a result of internal turmoil and substance abuse issues, before ending triumphantly with their successful “Back in the Saddle” 1984 reunion tour. The 612-page book is further augmented by a feast of visual material (concert and record ads, vintage reviews, and photographs) lending an engrossing portrait of America’s greatest rock and roll band.”