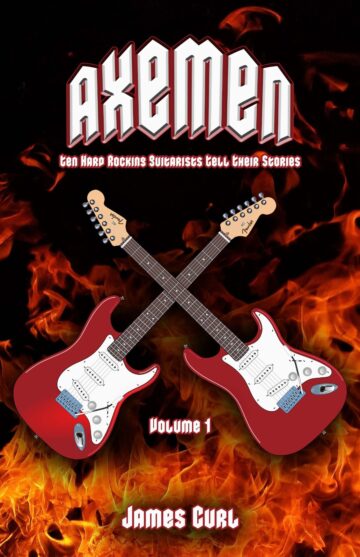 Author James Curl, who has already released the books Ronnie James Dio: A Biography of A Heavy Metal Icon (2018) and Dokken: Into The Fire and Other Embers of 80s Metal History (2020), has a new one titled Axemen: Ten Hard Rockin’ Guitarists Tell Their Stories, Volume One that was just released earlier this month.

“Ever wonder what it would be like to step on stage with the “King of Pop” Michael Jackson? or play in a band with such legendary rockers as Ozzy Osbourne, David Coverdale or Ronnie James Dio? What was it like to have a number one hit on the radio, gig on L.A.’s famous Sunset Strip during the wild ’80s, or tour through Germany with iconic actor David Hasselhoff?

All of these incredible stories and much more are told in this book. Ten guitar players tell ten unique stories; from how they started playing to what it was like to be on stage. Featuring exclusive interviews and first-hand accounts from: Rowan Robertson, Greg Leon, Gus G., Tracy G., Jennifer Batten, Steven Lynch, Joey Tafolla, Oz Fox, Jeff Duncan, and Joel Hoekstra.”

In an interview with Sleaze Roxx back in April 2021, Curl was asked what led him to writing books to which he replied: “I’ve had an interest in the sport of boxing for a number of years and had met several authors that had done boxing biographies. This is what initially sparked my interest to write a book. So basically, I just decided one day to pick one of my favorite fighters, and write a book about him. It took two years, but I eventually finished the book. From there, I decided to do book about one of my other passions — rock ‘n’ roll. I chose Ronnie James Dio because nobody had done a full-length book about him.”