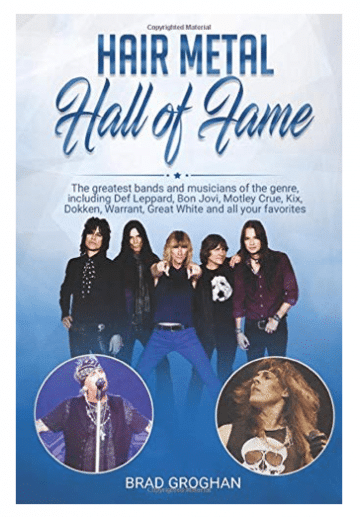 A new book titled Hair Metal Hall of Fame from author Brad Groghan has just been released and is available in paperback format.

The book divides various “hair metal” bands in a number of categories consisting of Mt Rushmore, Theatre Headliners, Openers and The Godfathers. There is also a category for Individual Hall of Famers.

Amazon states: “Hair Metal Hall of Fame is a book featuring the greatest hair metal, hair band, arena rock and sleaze rockers of all time. These are the bands (and musicians) that accomplished the most of all the amazing bands of the era. We got tired of the genre not being properly represented in the Rock N Roll Hall of Fame….so we created our own Hall of Fame, highlighting bands like Motley Crue, Def Leppard, Bon Jovi, Dokken, LA Guns, KIX, Poison and the best of the rest!!!”

Groghan is the co-author of the book Soundtrack of Our Youth: History of Hair Metal Music, which was released last year.