New book on AC/DC and Bon Scott titled ‘Bon: The Last Highway’ to be released on Nov. 7th

Great news for fans of AC/DC and particularly of the Aussie group’s Bon Scott era as a new 504 page book titled Bon: The Last Highway — The Untold Story of Bon Scott and AC/DC’s Back In Black penned by Jesse Fink will be released on November 7, 2017. 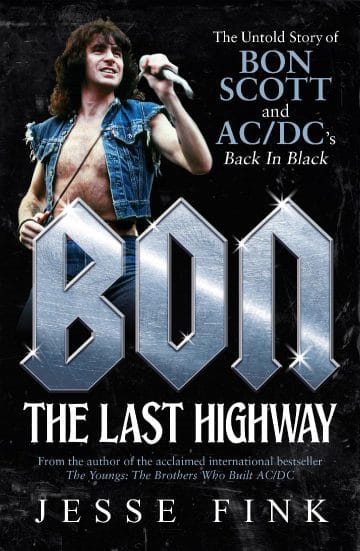 “It’s one of the greatest mysteries in rock. Puzzled over by fans and media for more than 40 years, the death of AC/DC singer Bon Scott (officially attributed to alcohol poisoning) has never been adequately explained. This book solves that mystery and others: who was Alistair Kinnear, the last man to see Bon alive, and what happened to him? Which former AC/DC manager believes Bon Scott wrote the lyrics for Back In Black? How much money did Bon have in his bank account? How far did Bon get with the solo album he planned to record? What’s the real story behind “Shazbot Nanu Nanu”, Bon’s famous last words on Highway to Hell?

The book also explores Bon’s part in the complex dynamics of one of world’s most beloved rock bands, sensational details about his love life, and the rigors of life on the road with AC/DC in the late 70’s.

Featuring a previously unpublished audio interview with Bon himself, a trove of never-before-seen photographs, and in-depth interviews with such rock legends as Foreigner guitarist Mick Jones and Van Halen bassist Michael Anthony, Bon:The Last Highway is the ultimate tribute to Bon Scott‘s life and music.

Music fans around the world have been waiting for the original, forensic, unflinching, and masterful biography Bon Scott so richly deserves — and now, it’s finally here.

Jesse Fink was born in London in 1973. He is the author of The Youngs: The Brothers Who Built AC/DC, which was released in more than 20 countries. Bon: The Last Highway is his fourth book. He divides his time between Sydney, Australia, and São Paulo, Brazil, with his wife and daughter. Find him on Twitter @JesseFink.”