New book ‘Our Jimi’ to be released on Sept. 18th to commemorate 50th anniversary of Jimi Hendrix’s passing

Great news for fans of Jimi Hendrix as there is a new book on the world renowned guitarist titled Our Jimi by author Aidan Prewett that will be released via Political Animal Press on September 18, 2020. Hendrix died at the age of 27 from barbiturate-related asphyxia on September 18, 1970. 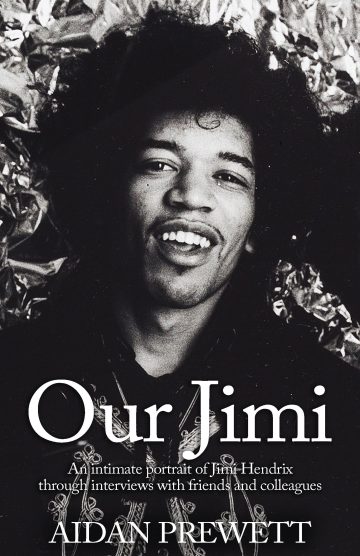 “Rock enthusiasts are set to enjoy a surprising new angle on the life of Jimi Hendrix in a new book commemorating the guitarist. Fifty years after Hendrix’s death, Our Jimi, published by Political Animal Press, is an in-depth exploration of the Hendrix character featuring all-new interviews with his closest friends, colleagues and family.

Critically acclaimed author and documentary filmmaker Aidan Prewett (A Venue for the End of the World, Woodstock at 50) asks the question ‘What was it like to know Jimi Hendrix?’ The answers are often surprising. Many of the stories in Our Jimi have never appeared in print or film before.

Our Jimi recounts personal moments with Jimi in telling detail: the reader travels with Hendrix from his first moments at New York’s Café Wha to his last gig in London. The book provides access to Jimi’s inner circle – chatting with Jimi on the plane to Monterey, jamming with him in London and Greenwich Village and joining him on stage at Woodstock.

“There were moments in these conversations when I could feel the hair on the back of my neck stand on end,” says Prewett, who spent two years tracking down some of the most reclusive members of the Hendrix circle. “At times it really felt like Jimi was somehow listening in.”

One of the most surprising moments in Our Jimi comes from folk superstar Janis Ian, who jammed with Hendrix frequently in her late teens. Despite Jimi’s ‘free love’ reputation, Hendrix and Ian enjoyed a purely platonic relationship based squarely in music. “Maybe in a sense it was a relief – like having a mascot around,” says Ian. The pair were in the audience at a B.B. King concert the night Dr. Martin Luther King, Jr was assassinated. “I remember Jimi and I both kind of slumping against the wall, in a daze. ‘How could that have happened?’”

Our Jimi is the first time Janis Ian has lent her story to a Hendrix project. Other participants followed suit: seldom-told anecdotes from musicians who joined Hendrix on stage and on classic albums, revealing personal stories from Jimi’s long term girlfriend Kathy Etchingham and studio secrets from industry wizards Eddie Kramer and Roger Mayer.

Jimi’s friends pull back the curtain to present him as a genuine human being, quite separate from his stage persona: Go-Karting with a grandmother in Majorca. Having Jimi over for Christmas dinner. Backstage hijinks and debauchery. These are moments that are often brushed over – but in its precise focus Our Jimi allows us to delve deeper into Jimi’s character.

Our Jimi is as close as it gets to spending a few hours in the company of Jimi Hendrix.”