New book ‘The Decade That Rocked: The Photography of Mark “Weissguy” Weiss’ available on June 2nd

A new book titled The Decade That Rocked: The Photography of Mark “Weissguy” Weiss featuring the photographs of world renowned photographer Mark Weiss will be available for purchase on June 2, 2020. 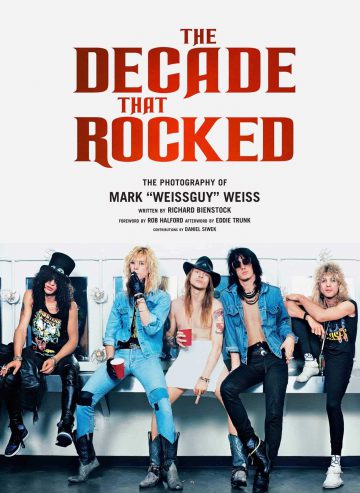 “Featuring the iconic and never-before-published photography of Mark Weiss, The Decade That Rocked covers the biggest names from the ’80s hard rock scene—including Jon Bon Jovi, Ozzy Osbourne, Mötley Crüe, Van Halen, and more—in an illustrated homage to the music and mayhem of rock’s most colorful decade.

The 1980s were an era of musical excess, filled with spandex, makeup, big hair, groupies, and loud, guitar-driven rock ’n’ roll. Photographer Mark Weiss lived at the heart of it all, documenting the biggest and most dangerous bands of the time—legends ranging from Van Halen, Ozzy Osbourne, Aerosmith, and Mötley Crüe to Metallica, Guns N’ Roses, Bon Jovi, KISS, and many more. The Decade That Rocked showcases onstage and backstage moments and never-before-seen images from the period’s most historic concerts, events, and album covers—all captured through the lens of Mark “Weissguy” Weiss.

Growing up in Matawan, New Jersey, Mark filled his teenage nights sneaking into concerts to shoot the biggest acts of the ’70s. After being arrested for selling photographs outside a KISS concert in 1977, he walked into the offices of Circus with his portfolio and soon landed his first centerfold spread—a photo of Aerosmith’s Steven Tyler. Soon after, he became the publication’s staff photographer. Throughout the ’80s, his photos were seen by millions, appearing in countless magazines around the world and on the covers of the most iconic albums of the decade.

Dig into Mark’s archives and take a tour through never-before-seen photos of a teenage Jon Bon Jovi, and behind-the-scenes and unreleased images from the album shoot for Bon Jovi’s Slippery When Wet and the band’s decade-ending historic performance at the Moscow Music Peace Festival. Travel to Washington, DC, as Twisted Sister’s Dee Snider sits before Congress to combat censorship at the infamous PMRC hearings.

Captured from the unique vantage point of a photographer who lived and breathed the ’80s in all its grit and glory, The Decade That Rocked brings to life the no-holds-barred sounds and sights that changed the world of hard rock and metal forever.”