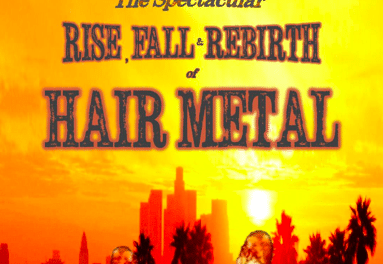 What better way to pass your time during these unfortunate but critical times of “social distancing” than by reading a book about hair metal? Author Chris Hilton of the Google website Hair Metal Forever has released a new 428-page book titled The Rise, Fall And Rebirth of Hair Metal, which is available via Amazon in kindle and paperback formats.

“The spectacular story of ’80s Hair Metal! What hidden mayhem truly lurked behind the curtain as outrageous bands such as Poison were having Nothing But A Good Time, only to find out later that Every Rose Has Its Thorn.

“For both devoted fans and people who just hum the tunes, this is the definitive account of Hair Metal’s history, including all of the behind-the-scenes drama and spectacle—a well-written and exciting adventure.”—Jonathan P. Brazee, USA Today Bestselling writer and multiple Nebula and Dragon Award finalist.

An intoxicating chronicle detailing the sensational arc of one of the history’s most polarizing and successful musical genres—the ‘80s-born hard rock and heavy metal circus affectionately known as Hair Metal. Spotlighting bands such as Mötley Crüe, Bon Jovi, and many others, prepare for an electrifying journey of enormous highs, unspeakable lows, and the improbable comeback of one of rock ‘n’ roll’s most extraordinary and influential eras.

Rising from the gutters of Los Angeles in the early ‘80s, an explosive new style of music was unrelentingly thrust upon the world. Fusing the rebellious aggression of traditional heavy metal with upbeat hooks and melodies, “Hair Metal” would emerge over the coming decade as one of the most successful and dominant forces the music industry had ever seen.

Defined by shredding guitars, flamboyant frontmen, fist-pumping anthems, and an extravagant fashion sense, bands like Def Leppard and Guns N’ Roses dominated the landscape, selling millions of albums and playing to sold-out arenas of frenzied fans across the globe. “Sex, drugs and rock ‘n’ roll” was taken to new extremes as excess in all forms ruled supreme in one gloriously outrageous celebration.

Then, seemingly out of nowhere in the early ‘90s, Hair Metal violently imploded in a stunningly mind-blowing fall from grace. The genre struggled with near-extinction for the better part of the decade as Grunge served as a new God to worship, representing the complete antithesis of everything ‘80s rock had come to symbolize. Many hair bands futility attempted to change with the times; most simply disintegrated.

Finally, at the turn of the century, Hair Metal miraculously sprung back to a renewed lease on life, rising from the ashes and establishing a stable platform upon which it has proudly stood to service its legion of devoted followers for the past twenty years.

Strap in for Hair Metal’s thrilling ride, with an in-depth look at the music, artists, and behind-the-scenes stories comprising an extraordinary era that impacted millions of lives. A time when real-life rock ‘n’ roll was truly more remarkable than fiction.

The Rise, Fall and Rebirth of Hair Metal — the one book no fan should be without! Your journey awaits…”