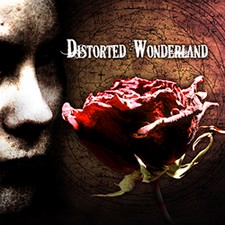 Distorted Wonderland features vocalist Olof Lindgren and bassist Axel Karlsson from the Swedish glam band Overnight Sensation. Moving in a different direction, Olof and Axel wanted to move on into a different direction. The idea was to combine strong melodies with hard and heavy riffs. When Olof and Axel were recording the backup vocals on Swedish rockers Hardcore Superstar’s fourth album, they felt inspired and that the time was right for a new band.

As a side project, they spent time writing songs and pre-producing the material until the pieces fell into place. Together with Petter Karlsson on the drums and Fredrik Lundstedt on guitar they started to record their self titled first album. The new video was also shot for the single on ‘Raised On Rock n’ Roll’.

In 2009 Overnight Sensation decided to split. Now Olof and Axel could focus on Distorted Wonderland and the album was finally finished in early 2010. The eleven songs on the album were created through a wide spectra of influences and deliver a musical mass of heavy rock combined with melodic choruses. The thought behind each song was to create a suitable mood and a balance between lyrics and music resulting in this battering ram CD.