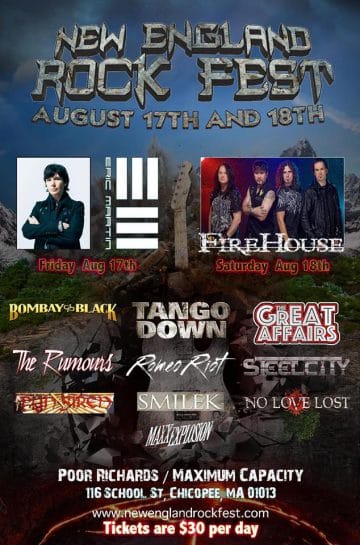 The event’s website states: “This year is Kivel Records’ TWENTIETH ANNIVERSARY!! So, we are not going to celebrate with some little barbecue in our backyard. We are going to do a two-day weekend event featuring 12 Bands and god knows what else!”

It also states (with slight edit): “This event just doesn’t celebrate Kivel Records‘ bands and artists. We are celebrating MUSIC as a whole. Kivel Records has not only produced and released over 60+ album titles over the last twenty years, we have also booked, promoted and organized shows with established nationals during our time in business.”

In addition to Firehouse and Martin, the festival’s line-up includes former and current Kivel Records artists including Bombay Black., Tango Down, The Great Affairs, The Rumours, Romeo Riot, SteelCity, Pyn Siren, Smilek and No Love Lost.