After a successful first edition, the New England Rock Fest organized by Kivel Records principal John Kivel is back for its second edition on August 16 and 17, 2019. Last year’s edition took place at the Maximum Capacity Sports Bar in Chicopee, Massachusetts, USA on August 17 and 18, 2018 and featured headliners Eric Martin and FireHouse. This year’s edition will feature Enuff Z’Nuff, Tango Down, Wild America, Station, SteelCity, Bad Marriage, No Love Lost, Jamie Rowe and other bands to be announced, and will be held at Poor Richards in Chicopee, Massachusetts, USA. 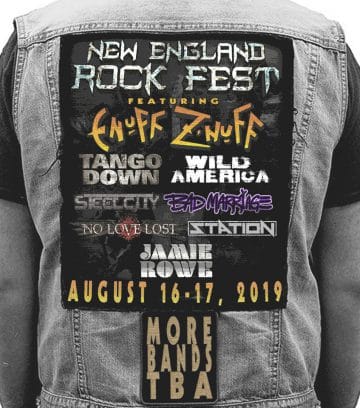 Here we go. Kivel Records has been involved with a lot of shows, events and festivals over the years. Some we have organized. Some we have helped organize and run. Some we just showed up and had as much fun as possible. With that said, one thing has always been constant, consistent and most of all the common link to all of the above. YOU. You the concert goer. You the music enthusiast. You the unknown band aficionado/expert. YOU the supporter of the music scene!

One thing we always hear is how we should get a certain band, or a particular “new” band. Something different, someone NEW. Someone that is keeping it ALIVE. So we thought we would take a slight detour from our usual list of suspect shows and line ups. We want this show to be a show case of sorts. Give some lesser know bands a stage to shine with ALL the bells and whistles. Where they wont be treated like an “opening act”. Playing on the floor in front of a drum riser. Half the lights. Limited stage, sound etc. (for the record not saying any headliner we have ever booked in the past has ever mistreated anyone at our events. DISCLAIMER so no one misinterprets what we are saying! lol)

So we want to give the next generation and some unsung heroes of the music scene there moment to play, to some of the coolest and most supportive fans in any genre of music there is. YOU, the hard rockers and melodic rock arena lovers.

HERE is most of the line up and we are finalizing the rest as we speak. If you are staying at the event hotel, we will be providing a constant running shuttle service to and from the venue to hotel throughout the entire weekend.

We will have great food once again provided for all in attendance. Seating. An up stairs and down stairs in case you need a break away. We will also have some awesome music vendors selling merch, goods and rare CD’s