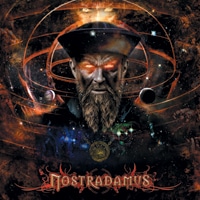 Judas Priest’s new CD ‘Nostradamus’ is streaming online at MTV’s The Leak. The album is scheduled for release in North America on June 17th.

Headbanging? These guys practically invented it, or at least fueled it from the start. More than iron, more than steel, more than lead, Judas Priest ARE metal. And that’s why MTV’s Headbangers Blog is bringing you the exclusive first listen to Nostradamus, a double album of pure ferociousness from the razor-sharp metal gods. While you must wait until June 17 to buy Nostradamus, Rob Halford, K.K. Downing, Glenn Tipton and the rest of the boys insist that you hear the whole thing, right now, only on The Leak.