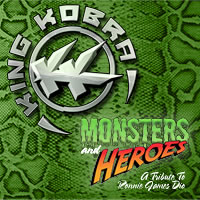 “Monsters And Heroes” is the first song recorded by King Kobra since 1986! This rocking track is pure King Kobra and all the proceeds from its sale go the the Ronnie James Dio Cancer Fund. Get some rock and help fight cancer by downloading the song now at www.carmineappice.net.

Rock legend and Sabian’s World’s Greatest Rock drummer, Carmine Appice is now offering rare tracks and impossible to find, out of production albums available as digital downloads directly from www.carmineappice.net. Some of Carmine’s best performances new and old are available with a brand new track from King Kobra! All proceeds from this track will be donated to the Ronnie James Dio Cancer Fund.

More tracks and full albums are going to be added to the continually expanding catalog each month. All tracks are just 99cents each and full album downloads offer a reduced price from the single track downloads price. Some of these tracks are not on iTunes, or Amazon, they are only available on Carmine’s web site. Visit www.carmineappice.net.