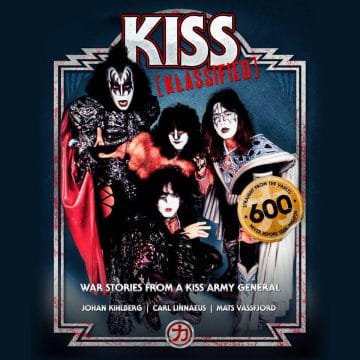 “For ten years Johan Kihlberg was the president of Kiss Army Sweden. He hung out in the studio with Gene Simmons and Paul Stanley, got drunk with Eric Carr, performed with Vinnie Vincent and was tour manager for Bruce Kulick. And he scolded Ace Frehley.

Johan Kihlberg did it all. And he lived to tell the tale.

It all started in the early eighties when he began stalking the members every time they were in Stockholm. Together with principal photographer Mats Vassfjord he continued to follow and document Kiss around the world.

This is his own incomparable Kisstory told to Sweden Rock Magazine’s prominent journalist Carl Linnaeus.

The book features 600 never-before-seen photos and several unpublished interviews with the band.

Buckle up and get ready for a disclosing and compassionate adventure in fandom land. The amplifier is humming. The carnival is about to begin … 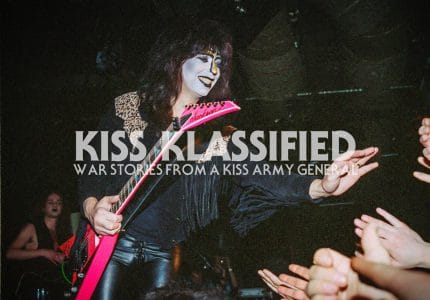 The following message was posted in part on KISS Klassified‘s Facebook page on May 19, 2017 pertaining to Vinnie Vincent:

“In March 1996, both Johan Kihlberg and Mats Vassfjord performed with Vinnie Vincent when he was in full Kiss make-up. Not only that, but they were with him basically all of the time during his weeklong stay in Stockholm, Sweden. There are plenty of stories from their adventures with Vinnie in the book. Why didn’t he play lead during the show? What did the doctor say about his fingers? Why did he subsequently bail from the expo tour? Below is an excerpt from the book about the gig, as told by drummer Johan Kihlberg.

Unfortunately, Vinnie got increasingly out of tune during the show. The stage manager had to turn him down more and more. I don’t think Vinnie cared. We never talked about it afterwards. Still to this day, people talk about the oddness of it all; a guitar hero not realizing he was out of tune, being turned down until he was practically inaudible and, not to forget, didn’t play lead. Come to think about it, he did play lead on I Love It Loud. On the other hand, it isn’t the most difficult solo in the world. The reason he didn’t play lead has been debated. I believed Vinnie when he told me he had wrung two fingers on his right hand in a car door two days before he departed the States. He said he could only play rhythm because of this.

The day after the expo, Vinnie said he wanted to have his fingers checked out by a doctor. I called my family doctor at the health center in Sätra, a borough in the southern part of Stockholm where I lived. I explained I had a “Kiss friend” visiting and got an appointment for Vinnie right away.”

You can order KISS Klassified in the EU and outside the US.