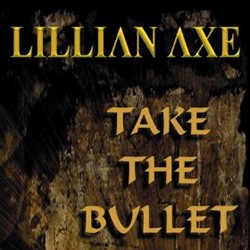 Lillian Axe’s new single “Take The Bullet”, the first with new lead-vocalist Brian Jones, is now available for purchase at Amazon.com and iTunes.com.

Louisiana Music Hall of Fame members, Lillian Axe are proud to announce Jackson, Mississippi, native Brian Jones, as their new lead vocalist. Steve Blaze, lead guitarist and band founder says “We have spent the last six months searching for and reviewing candidates to the point of driving us crazy.” Blaze continues, “Choosing your front man is the most vital task in a band’s existence, so we really took our time to make sure that the person we chose fit every category to the best of their abilities. Brian is a complete breath of fresh air. He is an amazing talent, as well as a fireball of enthusiasm, which has really sparked the attitudes of the rest of us.”

Jones, vocalist for the bands Guns of Addiction and Full Moon Circus, as well as guitarist for Wind-up Artist, Papercut Massacre, approached Blaze for the job in September. He states, “When I initially approached Steve about the possibility of becoming the new vocalist for Lillian Axe, I honestly didn’t know what to think and had a plethora of thoughts running amuck in my head. Having been a lifelong fan of the band and looking to Steve as a mentor for so many years, coupled with the fact that I was being asked to audition for one of my favorite bands, was a bit much to take in. I knew this was what I wanted to do and have been playing now for over 20 years, but I never would have imagined I’d be playing with Lillian Axe. The guys have been amazing and have taken me in quite nicely. I look forward to the many years to come and to the new music that we will be sharing with the fans.”

The Axe has commenced recording their eleventh album at Sound Landing Studios in Covington, Louisiana with the team of Steve Blaze as producer and Rob Hovey as engineer, due for a September 27, 2011; via Love and War Records /Mega Force Records / Sony Red Distribution. The first track, Take the Bullet, will be available for download on April 12. Says Blaze, Take the Bullet is a very special song for us. Several months ago, I received an email from Air Force Major Henry Cecil, who was stationed in Kabul, Afghanistan. He expressed his appreciation and gratitude for the dedication to the troops on our last album, Deep Red Shadows. He proceeded to send me an American Flag that had traveled on several helicopter missions, official patches, coins, autographs from his squadron, and even a copy of Deep Red Shadows autographed by General David Petraeus himself. We were incredibly honored and humbled, and since then, I have become good friends with Major Cecil. Several weeks ago, he drove to Covington and spent two days in the studio with us as we recorded Take the Bullet. I wrote this song in dedication to our troops for their heroic sacrifice for our country and their display of true brotherhood.”

Air Force Major Henry Cecil says, “I’ve been following Lillian Axe since 1987 and after reading the last page of the new CD’s liner notes, I immediately sent Steve an email thanking him from a long-time fan and that I was having a flag flown over Afghanistan, accompanied by the CD. I mailed the flag to Steve on 9-11-10 and included patches from the squadrons that took the flag on their missions, as well as an ISAF (International Security Assistance Force) coin to tie everything together that is in the display case for the flag. During my deployment, I had the honor to work with General Petraeus’ security team and made friends with them. I asked if they could have the General sign the liner notes to say thanks to Steve and he did. Steve and I have become great friends from this and we talk on a regular basis now. He invited me to watch Lillian Axe record Take the Bullet, and I can honestly say I was speechless after watching it all come together and couldn’t believe I was actually getting to watch them in the studio. It was truly an honor I will never forget.”

The month of April will be a busy one for the band. Take the Bullet will be released for download on April 12, introducing the voice of Jones. Also, Cuba Gooding, Jr.’s new movie, The Hit List will feature 47 Ways to Die as the opening song to the movie. The band will play six dates in the South to support Deep Red Shadows and celebrate their ten-album history.

Blaze states, “It gets more and more difficult to put together a set-list as we keep creating more and more music; however, this tour will bring new songs and new production as we start this new chapter in the history of Lillian Axe.”