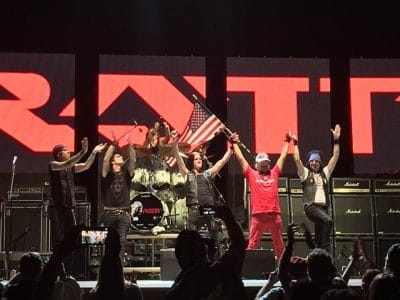 With only one day between the public announcement of the resignation from bassist Robbie Crane and Ratt‘s next gig today (August 11th) at the Buffalo Chip Campground in Sturgis, South Dakota, USA, along with the departure of guitarist Nicholas “Blaze” Baum, the main question was who would be the new band members that would fill in Bobby Blotzer‘s version of Ratt.

As it turns out, former L.A. Guns and current Angels In Vein guitarist Stacey Blades was on hand on August 11th to perform as the group’s new guitarist. If there is one person that should be able to handle the public scrutiny of stepping into the shoes of a guitar icon (Warren DeMartini) in a legendary band and walking into a difficult situation, it would have to be Blades who successfully replaced L.A. Guns founder and guitarist Tracii Guns in that band for ten years.

It also appears that bassist Todd Kerns who has played with Slash featuring Myles Kennedy & The Conspirators has replaced bassist Robbie Crane. Kerns had previously joined Ratt on stage at Chene Park in Detroit, Michigan, USA on August 6, 2016.

It’s so cool to see your friends playing with your other friends… who are their friends… Big Love to one big happy RnR Family! Closer to My Heart You should Know by Now Way Cool Jr