Lynch Mob and KXM guitarist George Lynch was interviewed by Andrew Catania at All That Shreds Magazine back in early April 2017 and spoke about the many projects that he has on the go including the next Lynch Mob records. 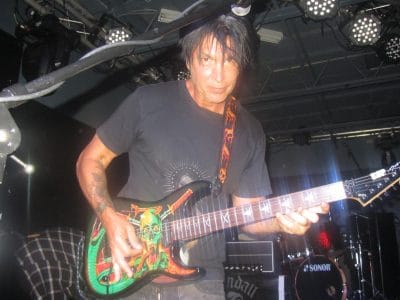 Lynch stated (with slight edits): “Yes. I’ve got a project called Abanishment which I’ve been working on for about five years with a gentleman called Haze who is an industrial programmer engineer, fixer, real talented and has worked with Brian Schnell The Prodigy and Zombie things like that. It’s an industrious less project. And Tommy Victor is the singer, and again that’s called Abanishment we just got everything done except we’ve got some vocals to finish up. I’ve got the new Sweet & Lynch record that I just finished writing that last week. We were in the studio on the east coast with Brian Tichy, James Lomenzo, and Michael Sweet and we finished tracking that. We’ll be done tracking tomorrow and finish up the vocals, and that will be done this coming week. Sweet & Lynch 2 or whatever we end up calling it, which I hope we don’t call it that. Thirdly, we have a project called Ultra Phonics which is an evolution of Project Nfidelikah which features Angelo Moore from Fishbone on vocals which we replaced with Corey Glover from Living Color….

And that took the rhythm section more with Tower of Power. That record has all been written, and Corey is finishing up the vocals, and we’ll be getting the mix on that, and that record should be coming out soon, I imagine. And our new Lynch Mob is coming out it’s called The Brotherhood that’s coming out, it’s been finished for a while, that will be coming out in June….

A Dokken live album was coming out with three new studio tracks on it as well as live DVD. That will be coming out probably at the beginning of 2018. And then Lynch Mob also has a live album and a DVD coming out at some point. So yes, I’ve got a lot of things in the pipeline which is very confusing… It’s confusing to me. I had to get that all off my chest, sorry.”

In terms of what the new Lynch Mob studio album will sound like, Lynch advised (with slight edit): “It’s along the lines of Rebel. I don’t know if you heard the Rebel record, but I think an extraordinary Lynch Mob effort you know it came out two years ago. It’s right along those lines. You know we always try to kick back into the Wicked Sensation days and always make sure you know that that’s in the mix a little bit, but you know again it’s 25 years later so you know we’re not that anymore so yes. This album is adventurous but still, that blues based hard rock with a trippy element and with Oni (Logan) doing his magical poetry and you know one of the greatest rock singers on the planet, unique obviously, he’s got his ways. Nobody else sounds like Oni. Yes, we’ve got a chemistry here.”

You can read the rest of the interview with Lynch at All That Shreds Magazine.