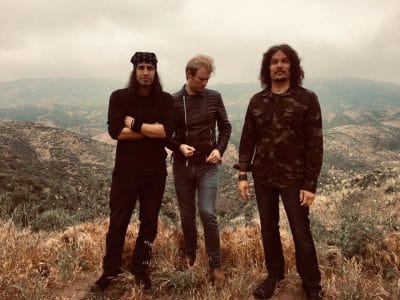 Tichy was recently interviewed by Jim Barber for Music Life Magazine and spoke about how he first met Shoulder and ended up working with him.

The drummer indicated (with slight edits): “Pete was in a band called The Union and they opened for Whitesnake on a UK tour when I was playing drums for Whitesnake [from 2010 to early 2013] and we met at that time, although we didn’t really hang out. But I do remember hearing him sing. I would get to the venue and they were opening up and I was like, ‘who is this amazing singer? He’s got a killer voice.’ And I made a note of that. But that was that, I thought….”

Tichy continued: “A few years later we got reacquainted and reconnected because I had a project going on with the DeLeo brothers from Stone Temple Pilots. We had recorded some music together without a singer and the idea was that hopefully we could find a great singer and make the project into a band. They didn’t have a STP singer at the time and they weren’t really sure about the future of that band. So, Pete came into the fold. Somebody knew somebody who knew him, and the guys heard about him and they sent me a tape of him singing and I thought he was amazing. And it ended up, like, oh that’s the guy in The Union who opened up for Whitesnake. We all made a record together [that was never released and likely won’t ever be] and I soon realized that not only is Pete a great musician and a great lyricist, singer and guitar player, but also a great guy. We all hit it off and made a record.

Somewhere around that time, the guys found what they felt was the right singer to move forward with STP [Jeff Gutt] and they had to make a decision. It was really difficult to have an existing band, especially one that is really successful and with a big history, to get back moving when you have this new thing going on. So, they had to make up their minds and we understood that STP was the priority because we’re all big fans of that band. It’s their life’s work, it’s their baby. The chose to move in that direction which was the right decision, and Pete and I chose to try to make lemonade with lemons. Soon after I was talking with him and asked him to come out to California from England and try writing and recording together and see what happens.”

You can read the rest of the article / interview with Brian Tichy at Music Life Magazine‘s website.