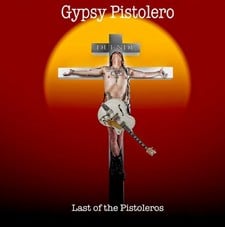 100% ROCK are proud to be at the vanguard of the new age of the record industry — part record label, part distributor, part promotions and marketing company, and all ROCK, 100% ROCK only sign artists they believe in, who are making music we love.

The label welcomes enquiries from unsigned and independent artists, and from established artists currently unreleased in Australasia. All enquiries should be directed to shane@100percentrock.com and should be from serious professionals — no time wasters please.

Lee Pistolero has mastered the sounds of a dirty Gretch guitar and launched a solo career as Gypsy Pistolero after the implosion last year of the Gypsy Pistoleros, the unique ‘flamenco sleaze glam rock’ band he founded in 2005. The Gypsy Pistoleros have been described by Tracii Guns as “one of the best Rock n’ Roll groups to come out of the U.K. for years.” The band also reached the Sleaze Roxx Top 10 of 2007 with their debut album ‘Wild, Beautiful, Damned!’ — “Listening to Wild, Beautiful, Damned I immediately picture the band playing in the background of Quentin Tarantino’s slash-fest From Dusk Till Dawn. Gypsy Pistoleros could easily have been the banditos strumming severed limbs while Salma Hayek gyrated across the stage.”