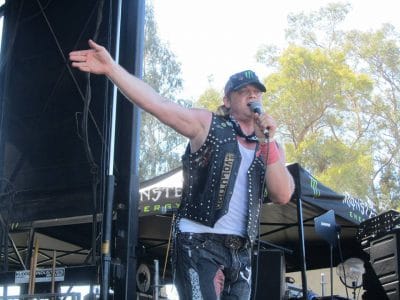 Rachelle spoke about what he has in the works music wise as he indicated (as transcribed by Sleaze Roxx):

“Well, Alexx Michael in Munich, Germany — obviously, he is the Gene [Simmons] or Nikki [Sixx] of Shameless. Today, they’ve been laying tracks for the eight Shameless studio record. Yeah. So he’s in the process of doing that. He’s already sent me a handful of songs…. The last time that we did a record, Alex had a variation of guests. Me and Steve Summers are usually the two key vocalists that have been on every record. Last time, he had Phil Lewis sing a song. I think that Cherie Currie was on a song. You know, over the years, he’s had John Corabi sing a song. Jani Lane has contributed at a point. Chris Holmes, Gilby Clarke, Robert Sweet of Stryper, Eric Singer, Bruce Kulick of KISS — I mean, there’s been a ton of guys that have contributed but you know, the mainstays are Alexx on bass, BC on guitar. Those guys are the duo from Germany.

Me and Steve end up usually singing three or four tracks each. So the eight Shameless record is underway and I’ll probably be singing some tracks. I probably would have already sang some tracks but because of all this stuff, going to Adam‘s [Hamilton] studio over here streaming vocals. You know, he’s got a child and I have kids, and this whole Covid thing is kind of keeping people away from each other. I’ll probably be doing something later in the summer.”

The guys in Brazil with Tales From The Porn, [guitarist] Andy‘s [Sun] been throwing some tracks for a while and we just messaged on What’s App the other day. I’ll probably going to Brazil to record some of it this time in Brazil. The plan is to have a couple of songs done here in the next couple of months and at the end of July or August, I will go to Brazil, hang out for a week to ten days, record some vocals and we’ll get a third of the record done. Those two projects are kind of underway and will be happening shortly.”

You can listen to the interview with Stevie Rachelle on The Classic Metal Show podcast via the Spreaker website.