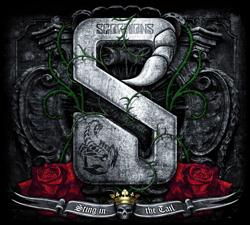 The Scorpions have made the single “Raised On Rock” available for purchase at Amazon.com. The song will appear on The Scorpions farewell CD ‘Sting In The Tail’ which is due for release on March 19th (March 23rd in North America).

Late last month The Scorpions announced that they plan to retire after the tour to promote their upcoming CD ‘Sting In The Tail’.

The band stated, “It was always our pleasure, our purpose in life, our passion and we were fortunate enough to make music for you – whether it was live on stage or in the studio, creating new songs.

While we were working on our album these past few months, we could literally feel how powerful and creative our work was – and how much fun we were still having, in the process. But there was also something else: We want to end the Scorpion’s extraordinary career on a high note. We are extremely grateful for the fact that we still have the same passion for music we’ve always had since the beginning. This is why, especially now, we agree we have reached the end of the road. We finish our career with an album we consider to be one of the best we have ever recorded and with a tour that will start in our home country Germany and take us to five different continents over the next few years.

We want you, our fans, to be the first to know about this. Thank you for your never-ending support throughout the years!

Courtesy of www.sleazeroxx.com and www.ebay.com