North Carolina hard rockers, 21st Century Goliath, unveiled their new singer to the world on December 5, 2015 during their live performance at a sold out Lincoln Theatre in Raleigh, North Carolina, USA while opening for the legendary Kix along with Automag, Last Call Messiahs and The Fifth. 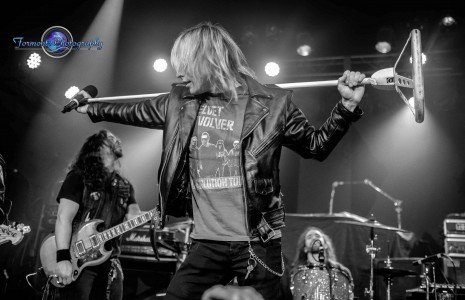 21st Century Goliath posted the following message on Facebook about an hour ago:

“DRUMROLL PLEASE! You’ve waited long enough. As many folks found out last night at Lincoln Theatre, we have been hard at work over the past few weeks with a new singer in the band room. We’ve kept everything under wraps so that we could surprise the sold out crowd at our second home in Raleigh, NC. Now the cat’s out of the bag, and we’d like to officially welcome Mr. Dalton Bowes to the band! Join us in welcoming him to the family!”

21st Century Goliath‘s new lead vocalist Dalton Bowes appears to be or was the singer in the North Carolina band Zestrah and went by the name of “Ezra Nation.”

Zestrah‘s bio on their Reverbnation page indicates: “Zestra[h] is a safe, effective botanical oil clinically proven to increase women’s feelings of desire and arousal. 😉 Zestrah is a hard rock band formed in Greensboro, NC. Zestrah was started the drummer Curly when his old group fell through. “I was on the search for 3 crazy fuckers like me and that’s exactly what I got haha” The first person to join was vocalist Dalton Bowes. Next was lead guitarist Ky Wolfe, and last but not least, bassist Eric Dangerously. With the bands lineup complete they started playing shows immediately. They are currently making a name for themselves around Greensboro, Winston, and Charlotte. Bands and club owners have labeled them as “misfits” but love the music and energy they are bringing to the stage. You’ll never see the same live show twice from us haha. See ya fuckers!!!!! \m/”

Live at SomeWhere Else Tavern (SWET) in Greensboro, NC.https://www.reverbnation.com/zestrahbandhttps://www.facebook.com/Zestrahband?sk=app_2405167945https://…

Exactly one month ago, 21st Century Goliath had parted ways very suddenly with their long-time lead vocalist Tony Leone in the midst of a tour throughout parts of the United States of America.

In an exclusive and candid interview with Sleaze Roxx three days later, 21st Century Goliath‘s founder and guitarist Scott Roby revealed the circumstances of how Leone parted ways with the band: “Things just came to a head on the road. On the last night of the tour, we were a late addition to a show with another out of town band on a weeknight, and the crowd was sparse as is to be expected. Tony was disgruntled and hurried through the set. He sang the last song with his back to the crowd and cut our set short, mainly because he didn’t want to be there. He basically demanded to the band that we cut straight to our closer without any discussion. He sang it with about as little gusto as I had ever witnessed. I was utterly embarrassed by his actions, and expressed my displeasure after the show. That’s not how we operate. Our motto is “10 or 10,000” meaning we give it hell whether we’re in front of ten people or ten thousand, and our fans know that and respect that about us, but he had forgotten that. When I voiced my displeasure outside of the venue over his actions, he reacted with indifference and defiance to what had occurred, and that sent me over the edge. I lashed out and we had a scuffle, and at the end of it, he was fired. No punches were thrown, but it was clear that the relationship was broken. He may have a different opinion as to why it is that things went sour, but to me, our relationship was fractured because he gave up on us. Our band and our fans deserve better.”