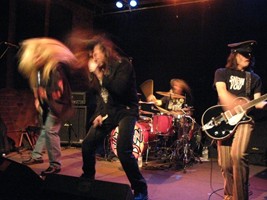 Sleaze Roxx have managed to get their hands on the brand new Snew track “Pull My Stinger” from an anonymous source. The song will appear on the band’s upcoming third album ‘What’s It To Ya’.

Owsinski, a pioneer in the art of surround sound music mixing, is a respected author, speaker and music industry advisor whose production credits include projects for Elvis, Jimi Hendrix, Neil Young and Chicago. Owsinski also produced Snew’s much-praised debut ‘Snew You’ (2008) and ‘We Do What We Want’ (2010).

“Bobby is a guru in the music recording industry,” says lead singer Curtis Don Vito. “He’s a master at capturing that raw high energy sound that defines Snew. We’re really fortunate to have him on this project.”

Ken Scott is a legendary engineer/producer who has recorded many of rock’s seminal albums, including The Beatles’ ‘White Album’, David Bowie’s ‘Ziggy Stardust’ and the ‘Spiders From Mars’ as well as albums from Supertramp, Pink Floyd, Alice Cooper, Kansas, Devo, Hellion, Jeff Beck and many others.

“Ken is truly a wizard when it comes to getting great drums sounds, and any other sound for that matter,” says drummer Mark Ohrenberger. “I’ve never heard my drums sound so amazing in the studio.”

The band recorded new songs that will appear on their third album ‘What’s It To Ya’. The tracks feature new bassist classic metal pioneer and former Black Sheep front man Willie Basse.