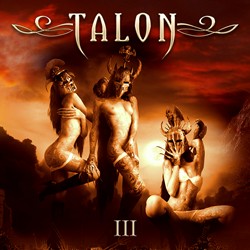 Talon is set to release ‘III’ on November 25th through Escape Music. Making an appearance on the upcoming CD will be Jeff Scott Soto of Journey and Talisman fame.

An American band and based in California, Talon was born from the ashes of Voxen — a band that achieved international success with their release ‘Sacrifice’, which included a track that was used in the major motion picture Outbreak starring Dustin Hoffman.

Soon after, a new vision was brought forward with the recruitment of Michael O’Mara (Joshua Perahia, EFX) and demos were soon recorded and then the band signed on with Now and Then/Frontiers Records which culminated with the release of their self-titled debut. The CD was produced by Mikey Davis (KISS, W.A.S.P., Slaughter).

Upon release, the CD was wildly praised and was on countless top 10 lists for the year. Soon followed major live shows, including The Gods Festival in the U.K. Talon also had the privilege of being Stan Bush’s backing band at The Gods Festival and the subsequent DVD release. After a break of working on individual projects, Talon recorded new demos and ultimately signed with Kivel Records and then recorded their next release ‘Fallen Angels’. With a closer vibe to an AOR feel, New York native Chandler Mogel was brought on board and more live shows — including Firefest 5 — were performed. ‘Fallen Angels’ was a huge success and brought Talon into the forefront of the Melodic Rock field.

Upon mutual agreement, Chandler Mogel went on to front the Greece outfit Outloud and with a new group of songs, Talon were on a quest to create the ultimate album and added some serious quality to the band — Shawn Pelata (Line of Fire) and Eric Ragno (China Blue, Takara, etc.). Now, the band have just signed to Escape Music for the release of this classic slab of Melodic Rock — ‘III’ — which is scheduled for release in November, 2011.

Talon ‘III’ recently completed mixing at The Recovery Room by Ty Sims (Far Cry, Tango Down) and is full of classic hard rock songs and ballads that the band describes as “really a return to the sound, vibe and energy of our debut S/T release”.

“This latest CD was a total labour of love and we all feel this will be our strongest release to date! We pulled out all the stops and really think the results speak for themselves and is an excellent follow-up to our recent ‘Fallen Angels’ release”, continues the band.

In addition, premiere vocalist Jeff Scott Soto (Journey, Talisman, JSS) has a guest appearance on the album with some amazing lead vocals on the hard-driving track “Take You All The Way”. The best musicians contributed their best talents to help create an outstanding release!