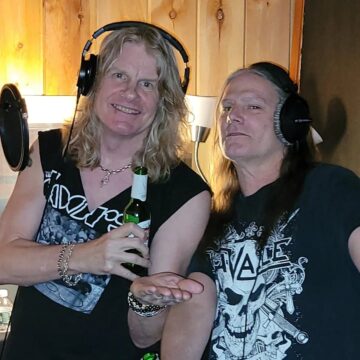 “People that know us, know they can expect us to sometimes be secretive when working on something. They can also expect surprises and us keeping people on their toes.

Now with that said. Last night we finished something that we started over a year ago. Something that came to a grinding stop thanks to a pandemic. Well this past week all of that changed. We were never out, we were never defeated. We were just delayed.

Nonetheless, we are BACK, and Last night we nailed it.

New Tango Down coming this October!!!!

Scott Chas Axel and Keith still got some gas left in the tank !!”

“This is one time where the output actually matched the hype. Prior to hearing Tango Down‘s Bulletproof, I kept reading how great the album was and how it was one of the best records of the year. As it turns out, that is indeed the case. Not many bands could survive having four different lead vocalists when they have only released five albums, let alone thrive under such circumstances, but Tango Down have proven that it is worth making the changes to get it right. I don’t know who recruited lead vocalist Chas West (Lynch Mob, Red Dragon Cartel, Resurrection Kings) into the band. Perhaps it’s the principal (John Kivel) of Tango Down‘s long-time record label Kivel Records or guitarist Scott Miller himself, but whatever the case, it was a great move and the end result is an amazing album that reminds me of the magic that can be heard on Whitesnake‘s self-titled blockbuster album in 1987. Bulletproof is filled with melodies, catchy hooks and stellar harmonies, and is a must have album for 2016. Given the band’s musical carousel history in terms of lead singers, I really hope that we will get at least one more Tango Down album with West handling the lead vocals.”