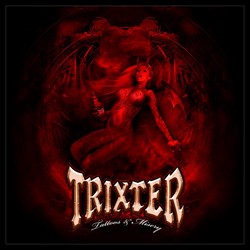 Trixter will release ‘New Audio Machine’, their first new album in 20 years, on April 20th in Europe and April 24th in North America and the album’s first single, “Tattoos & Misery” is now available for purchase at iTunes.

Featuring the band’s original line-up, ‘New Audio Machine’ is produced and engineered by Chuck Alzakian (Elton John, Christina Aguilera, Tesla) and includes songwriting contributions by Skid Row’s Snake Sabo and Rachel Bolan and former Styx member Glen Burtnik. Trixter frontman Pete Loran commented, “After all these years playing and recording with this band, I would say I am most proud of this record!” Lead guitarist Steve Brown added, “New Audio Machine is everything Trixter was and everything we are now. I can’t wait for the world to hear it!”

Northern New Jersey’s Trixter’s self-titled debut album (1990) spawned three monster hit singles/videos with “Give It To Me Good”, “One in a Million” and “Surrender”, as well as an RIAA-certified Gold album. Voted “Best New Band” by Hit Parader Magazine and “Best Concert” by Metal Edge Magazine, Trixter has toured extensively in the United States, Canada and Japan. They have performed in arenas and amphitheaters with crowds of up to 35,000 and have appeared live on numerous television and radio programs such as Entertainment Tonight, Pay-Per-View, VH-1, MTV, Z-Rock and MetalShop. Trixter has shared the stage with such rock heavyweights as KISS, Boston, The Scorpions, Poison, Vince Neil, Cinderella, Warrant, Slaughter, Winger, Skid Row, Great White, Firehouse, Faster Pussycat, Stryper, Dokken and more. The band recently nabbed the #29 spot on VH-1’s “Top 40 Hair Bands of All Time” countdown.