New Whitesnake, and former Dee Snider and Steven Adler, bassist Tanya O’Callaghan was recently interviewed by Anthony Montalbano for Vinyl Writer Music. Back in late November 2021, Whitesnake announced that O’Callaghan was going to be the group’s new bassist. 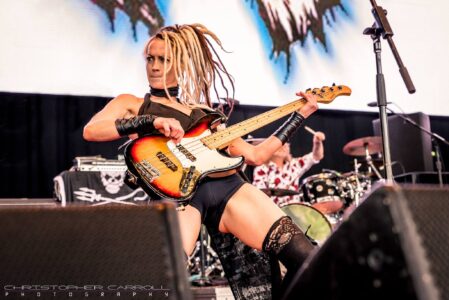 In terms of how she landed the Whitesnake gig, O’Callaghan indicated: “David [Coverdale] just called me because we already knew some of the guys, that’s kind of how it works. It’s like your peers promoting in the circles. So, the guys would have seen me play because we’ve played a lot of the same festivals. So, a different guy would see me with Steven Adler or Dee Snider, and we were often playing in these things, and we were at one particular festival, I think two or three years ago, and David [Coverdale] saw me play, and I guess it was just in his head. Then when the opening came up for the bass player, a lot of times in a situation like that they just already know, he just called me immediately and was like, “Are you available?” So, I mean, obviously, you’re not saying no to Whitesnake. It’s all good people, some of whom I know from before, some who are new to me. I can’t wait, a really good group of people.”

With respect to whether she thinks that it will be an easy transition to play with Whitesnake given her unique style of bass paying and the many genres that she can play, O’Callaghan opined: “I toured with Dee Snider for two years, so I have played a lot of heavy stuff. This is definitely my jam. I mean, I’m not familiar with a lot of this stuff, because I just didn’t grow up with it in Ireland, obviously. I knew who they were, and I know the hits, but it’s fun now because I’m diving into all the hundreds of notes, and hundreds of songs. It’s always interesting at the beginning of something like this because there’s a lot to learn. David obviously has an incredible back catalog of music that goes back to Deep Purple, and many other albums he did. So, there is a lot of incredible music. It’s time to lock myself in the shed, and get learning. [Laughs].

I play a lot of rock ‘n’ roll. It’s a lot of riffs and a lot of just driving bass. I’ve played a lot of pop, R&B, and whatnot over the years, but you just adapt because as a bass player, it’s all about your groove, your timing, and your pocket. I’m not a flashy player. This is what I love, actually, this kind of gig, because it’s just driving bass lines. So, it’s nothing I have to change, it’s just playing for the music. You want to represent the song as best you can, so it’s really about stepping into the shoes of the bass player. That’s the cool thing, there are so many bass players across Whitesnake’s albums, and you want to honor, and pay homage to them, but you also want to be yourself. What the interesting is figuring out like fingerstyle versus pick on some of them, what feels better to me, or if the song needs to be this way, then I need to do it that way. So yeah, it’s an amazing play though. They’re just great bass lines.”

You can read the rest of the interview with Tanya O’Callaghan at Vinyl Writer Music‘s website.