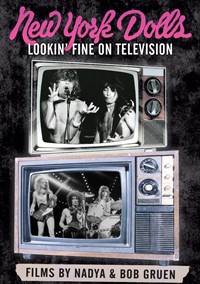 Bob Gruen’s amazing archival footage of the legendary New York Dolls in the early 70s will be released on DVD as ‘Lookin’ Fine On Television’ on November 22nd.

In the early 70’s, Rock photographer Bob Gruen and his wife Nadya purchased a portable video recorder. In a period of three years, they shot over 40 hours of New York Dolls footage. This footage became the critically acclaimed documentary ‘All Dolled Up’. For ‘Lookin’ Fine On Television’ more footage has been edited to create fifteen live music video-style clips.

These fifteen clips include footage from the Dolls’ early shows in NYC at clubs such as Kenny’s Castaways, and Max’s Kansas City as well as their West Coast tour: Whisky-A-Go-Go, the Real Don Steele Show, Rodney Bingenheimer’s English Disco, and more.

All the fan favorites are here including ripping versions of “Personality Crisis,” “Who Are the Mystery Girls?” “Babylon” and more. See the incredible early days of the band that influenced generations of punks and rockers.

Released by MVD Visual, ‘Lookin’ Fine On Television’ can be purchased at mvdb2b.com/s/NewYorkDollsLookinFineOnTelevision/MVD5272D.