Newmachine featuring original member / drummer Ryche Green are finishing the recording of their new studio album Full Circle, which will be released via HighVolMusic in spring 2018. Newmachine had previously released an album entitled Karma before the band split with Green retaining the band name while three of the four remaining band members went on to form a new group. 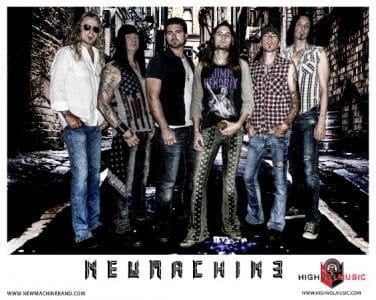 “HighVolMusic recording artist Newmachine is wrapping up the recording of their sophomore effort due out late Spring 2018. Final tracks are being recorded and then mixing/mastering begins. The new album titled ‘Full Circle‘, is being recorded/engineered by Bo Davis with mixing by Chris Presnell, and mastering still to be determined. “We are looking at a few different mastering engineers, Ted Jensen at Sterling Sound, Anthony Focx who also happens to be signed to the same label as we are, and our label is reaching out to Maor Applebaum in L.A.. Maor did the new Snake Eyes Seven record and it is fantastic!” says vocalist Ashton Blake.

‘Full Circle‘ will contain 10 tracks of high energy rock. Below is a demo clip from Sonic Recording Studio of the band working on the new track ‘Master of My Fate’.

The band will be performing at 80’s in the Park on February 16th-18th and then again on February 24th with Jefferson Starship at Center For The Arts Of Bonita Springs. A special guest will be on stage with Newmachine for the show on the 24th, details to follow.”

Newmachine‘s “Master Of My Fate” demo: