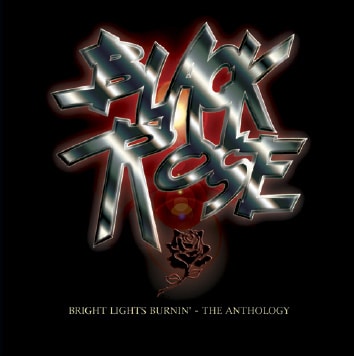 NWOBHM North East of England 80’s band Black Rose havereleased a new cd album called Bright Lights Burnin’ -The Anthology.The new album is on the Majestic Rock label andfeatures 15 tracks taken from various recordings madein 1981-87.These include their first ever single ‘ No Pointrunnin’ and tracks from both their studio albums ‘Boys Will Be Boys – Walk It how You talk it ‘.Sleevenotes are by John Tucker and the 12 page colourbooklet includes loads of photographs.

The cd is available to but from the majestic rockwebsite priced 11.99.Majestic Rock have just released a new compilation byBlack Rose titled Bright Lights Burnin’ – TheAnthology.

“Maybe third in line after Def Leppard and HeavyPettin’, Black Rose had the stadium riffs but nevergot the producer nor the studio time they needed tobreak radio big…” – Martin Popoff, ‘The New Wave OfBritish Heavy Metal Singles’That says it all – Black Rose where a band that, giventhe breaks, could genuinely have been amongst the bigboys. Sure, that may have been true of a lot ofbands…but listen to this disc and tell me we’rewrong here.

Covering their complete career and containing a numberof rare tracks and previously unseen photos plussleeve notes from respected NWOBHM scribe JohnTucker,this goes some way towards redressing thebalance and giving Black Rose the kudos they so richlydeserve..