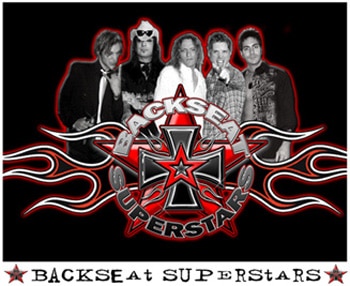 Chavis Records is happy to announce 2 new signings to kick off the New Year!

Atlanta, GA based hard rock act Backseat Superstars, best known for their high energetic alcohol fueled rock n’ roll, join Chavis Records for the release of their yet to be titled debut CD. The Superstars blend many facets of the hard rock genre to bring you their version of how rock is meant to be; just five guys with one common goal – to play sleazy, ballsy, no frills, white-knuckled, Rock and Roll, in an era that is overrun with corporate induced blandness. Checkout the single Motorcade

Azrael’s’ Bane and Python will be performing at CBGB’s in New York City, Friday Jan 27th for the Electric Eye Fest I. Both bands are slated to have new full length releases due in 2006.

Our latest release Power Forge by Vindex will be in stores Jan 31, 2006. You can preorder your copy from our new virtual store now.

We have re launched our website (www.chavisrecords.net) with many new features and also have a lot of great things in store for 2006! We will announce a couple of new signings and releases later in the year. We have a variety of great new music to release this year so surf on over and check us out!