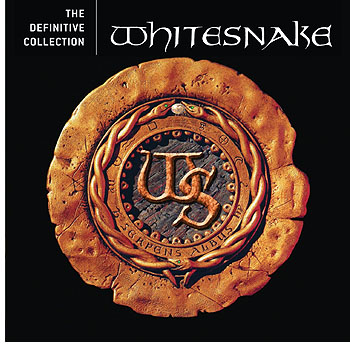 WHITESNAKE’S THE DEFINITIVE COLLECTION DUE OUT FEBRUARY 7TH:

With the latest shout-outs in the movie “The 40-Year-Old Virgin” and Bowling For Soup’s hit single “1985” (“She was gonna be an actress/She was gonna be a star/She was gonna shake her ass/On the hood of Whitesnake’s car”), Whitesnake continues to prove that one of the bands that defined an era remains embedded in today’s pop culture.

Now the first single-disc retrospective of the band led by David Coverdale and Whitesnake’s first official DVD live set both debut in early 2006. The CD, “The Definitive Collection,” produced with the full participation of Coverdale, and the DVD, “Live…In The Still Of The Night (Special Collector’s Edition),” recorded in the U.K. in Fall 2004 and including a bonus 10-song CD, will be simultaneously released February 7, 2006 by Hip-O/Geffen/UMe.

From “Slide It In” are the rockin’ blues “Slow An’ Easy” and the title track, and the modern slickness of “Love Ain’t No Stranger.” Whitesnake provided a timeless rock anthem in the #1 “Here I Go Again” and a classic power ballad in the #2 “Is This Love” as well as the majestic “Still Of The Night” and “Give Me All Your Love.” “Slip Of The Tongue” spun off the Top 40 pop hits “Fool For Your Loving” and the ballad “The Deeper The Love,” plus “Judgment Day” and “Now You’re Gone.” “Looking For Love” was first heard on 1994’s platinum “Greatest Hits” album.

The two-hour-plus DVD “Live…In The Still Of The Night (Special Collector’s Edition)” can be heard in either stereo or 5.1 Surround Sound. Along with performances of many of the hits heard on “The Definitive Collection,” including “Here I Go Again, “Fool For Your Loving,” “Still Of The Night,” “Is This Love” and “Give Me All Your Love,” the concert features “Crying In The Rain” (1982’s “Saints & Sinners”), “Take Me With You” (1978’s “Trouble”), “Bad Boys” (“Whitesnake”), “Don’t Break My Heart Again” (the 1987 European version of the “Whitesnake” disc) and a medley of “Burn” and “Stormbringer,” which Coverdale wrote and sang while in his former band, Deep Purple.

Helmed by celebrated concert director Hamish Hamilton (U2, Madonna, Red Hot Chili Peppers), “Live…In The Still Of The Night (Special Collector’s Edition)” also boasts a behind-the-scenes documentary, a photo gallery and a 59-minute bonus CD of 10 of the live performances.