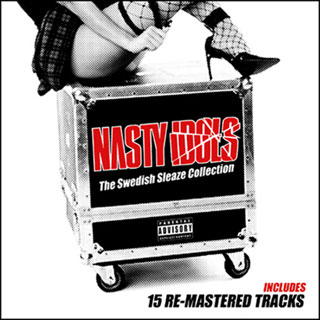 In January 2006 the Nasty Idols will release a brand new album with a collection of their songs called “The Swedish Sleaze Collection”. It will be released on the Swedish label Swedmetal Records and includes tracks from the “Cruel Intention”, “Vicious” and “Heroes For Sale” albums.

The album is the first Nasty Idols CD release on the Scandinavian market since 1993. All the tracks are re-mastered and includes never before seen pictures and a full biography.

The Swedish Sleazerock band Nasty Idols started out at the end of the 80’s. They released four albums, toured and was featured in the musicpress as the new musical hope from Scandinavia. They also achieved publicity for their on and off stage antics: all in the fastlane of Sex, Drugs and Rock n’ roll. After the split up of the band in 1995 they are still selling albums all over the world and are often compaired to multi-million selling rockacts as: Motley Crue, Guns N’ Roses and Skid Row. Signed to a new label (www.swedmetal.com) and a re-union of the band in the Spring 2006 they’re now releasing a collection of their best tracks. The 15 re-mastered tracks proves that Nasty Idols are in the top leauge of their down and dirty sleazerock and to this day still are!