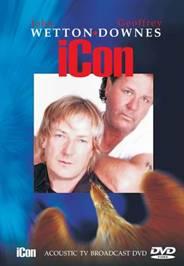 Following the successful reunion album entitled “ICON” that was successfully released on Frontiers Records in May 2005, John Wetton and Geoffrey Downes recorded – on October 27th 2005 – in a TV studio an acoustic set of ASIA and ICON songs, accompanied by ELO’s Hugh McDowell on cello.

The resulting performance has been recorded on a DVD and will be released on Frontiers Records with the title of “ICON Acoustic TV Broadcast” on a separate CD and DVD release on April the 21st 2006.

The tracklisting includes the following songs:
Heat Of The Moment
Voice Of America
Let Me Go
God Walks With Us
Sole Survivor
Meet Me At Midnight
The Smile Has Left your Eyes
I Lay Down
Open Your Eyes
Only Time Will Tell
Don’t Cry
In The End

The DVD will also include an extensive interview by BBC presenter Big George, behind the scenes footage and photo gallery. The DVD will be released in NTSC region 0 (free) format exclusively.

All songs have been performed in a very stripped down and intimate form with an instrumentation based only on grand piano, acoustic bass / acoustic guitar and cello. A new way to listen to old and new timeless classics, a present to all the fans!

Release in Japan has also been settled in March ’06 on Marquee / Avalon Records.