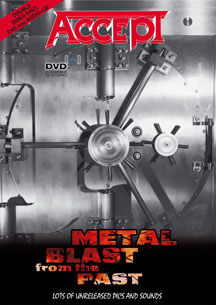 ACCEPT – METAL BLAST FROM THE PAST:

This DVDplus (double sided disc: DVD and Audio CD) captures the spirit of ACCEPTs early career with previously unreleased numbers, the Japan bonus track Rich And Famous and demo versions of five Breaker cuts. It also contains a video recording from Osaka, a visual document of the groups first Japanese tour, which proves impressively how enthusiastically the band were celebrated in the Land of the Rising Sun. Until now, this performance was only available on the double live LP, ‘Staying A Life’. There is also footage from their 1993 show in Sofia, broadcast by Bulgarian television at the time and documenting the comeback of a band which had previously split up.

Song Titles:
Live video osaka 1985: metal heart, breaker, screaming for a love-bite, up the limit, living for tonite, princess of the dawn, restless and wild, son of a bitch, london leatherboys, fast as a shark, balls to the wall, outro (bound to fail); videoclips: i’m a rebel, balls to the wall, midnight mover, generation clash, protectors of terror, slaves to metal, death row; live sophia ’93: starlight, slaves to etal, objection overruled. CD: previously unreleased audio tracks: rich and famous; rocking for the sun; morning sun; run if you can; down and out; can’t stand the night; breaker; burning; writing on the wall