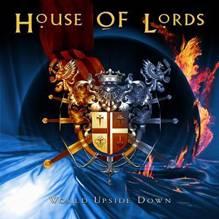 HOUSE OF LORDS TURN THE “WORLD UPSIDE DOWN” ON MAY 19TH:

Frontiers Records is pleased to announce all details for the release of HOUSE OF LORDS brand new studio album entitled “World Upside Down” on May 19th 2006.

Following the return on the market with “The Power & the Myth” in 2003, HOUSE OF LORDS decided recently to have a reunion tour that took the band to England & Greece for two outstanding shows in the fall of 2005.

After the short tour singer James Christian decided to continue with the trademark sound of HOUSE OF LORDS with the help of his original bandmate Gregg Giuffria. A new line-up added new life into the grandiose sound. Jimi Bell on guitars, B.J Zampa on drums and Jeff Kent on bass & keyboards make up the new powerhouse band. This CD can be considered sonically as an extension of their critically acclaimed “Demons Down” CD. Every song tells a story and every moment of music is HOUSE OF LORDS at its best!

“World Upside Down is quite possibly the best CD HOUSE OF LORDS has ever released” says James Christian, who adds: “this lineup is here to stay and this is only the beginning of many more great records from us. The music will speak for itself and I guarantee the fans of the classic HOUSE OF LORDS baroque and grandiose sound of our early albums will be delighted!”

The tracklisting shall feature the following songs (click on the song title to hear an mp3 sample):
Mask Of Eternity
These Are The Times
All The Way To Heaven
Field Of Shattered Dreams
I Am Free
All The Pieces Falling
Rock Bottom
Million Miles
Your Eyes
Ghost Of Time
My Generation
S.O.S
World Upside Down

European release date is settled on May 19th 2006, while the release in Japan shall happen on King Records. The record will also be available via download on I-Tunes and other fine digital shops within one month from the physical release date.