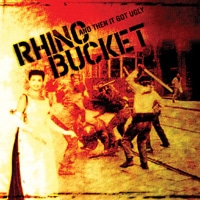 RHINO BUCKET, the Bon Scott-era AC/DC sound-alike band that recorded two albums for Warner Bros./ EMI back in ’90 and ’92 and an independent album in ’94 with former AC/DC drummer Simon Wright, are currently on the road with SUPERSUCKERS. Remaining dates are as follows:

RHINO BUCKET’s new CD, “And Then It Got Ugly”, was released on April 18 via Acetate Records. The group’s fourth album was mixed at Soundface Studios in Hollywood, California and was produced by the band and Stephan Siggurson.