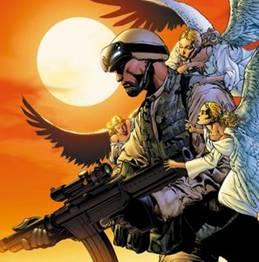 Frontiers Records is pleased to unleash all details surrounding the much talked come-back album from WINGER simply entitled “IV”.

The new album, according to Kip Winger is “the result of my chemistry with Reb Beach”. “Songwriting and composition are the most important thing to me”, continues Kip, “In my opinion good songs are a combination of life, experience and accident. On WINGER IV all of those things came together. Reb and I are more comfortable with each other now and our musical roles with respect to each other are more clearly defined”.

“IV” is definitely a career-defining album for the experienced musicians that created it. “This was a very magical record. I gave it everything I had, I thought of the overwhelming support I’ve had over the years by the die hard fans and really wanted to give them something worth listening to”, says Winger.

The record has a very diverse feel: the aggression of tracks like “Right Up Ahead”, “M16” or “Livin’ Just To Die”, the mystical elements “Disappear”, the lyricism and sheer melodies of “Blue Suede Shoes”, “On A Day Like Today” and the political elements of “Can’t Take It Back” and “Generica”. The album has something for everyone.

“Several songs on this record” reveals Kip, “were inspired by my experience performing at a few military bases, after meeting some of the men and women who are in the line of fire. I wrote songs like “Blue Suede Shoes”, “Right Up Ahead” and “M16″ as a way of giving something back to the soldiers who sacrifice themselves for the rest of us to live free”

WINGER’s return album will be unleashed on the markets on Frontiers Records on October 20th 2006 with a Japanese release on King Records with the following final tracklisting:
Right Up Ahead; Blue Suede Shoes; Four Leaf Clover; M16; Your Great Escape; Disappear; On A Day Like Today; Livin’ Just To Die; Short Flight To Mexico; Generica; Can’t Take It Back.