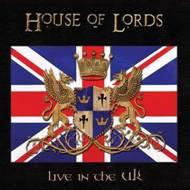 The fans asked for it and they are getting it ! HOUSE OF LORDS last ever live recording with the original line-up, mirroring the show held at Firefest in Nottingham, England on November 26th 2005 will be released worldwide on Frontiers Records on January 26th 2006.

HOUSE OF LORDS is a legendary arena-rock band born on the ashes of GIUFFRIA. With three studio albums recorded between 1989 and 1992, this group became a milestone in Melodic Hard Rock music. Mixing influences from JOURNEY, WHITESNAKE and VAN HALEN, HOUSE OF LORDS music has become a staple in Rock fans’ collections and playlists.

HOUSE OF LORDS reunited in the year 2000, after a seven years hiatus, with the classic line-up featuring James Christian, Gregg Giuffria, Chuck Wright, Lanny Cordola and Ken Mary with Giuffria who opted out of the recording at the last minute. Following the release of the come back album “The Power & The Myth”, HOUSE OF LORDS decided on a reunion tour that took the band to England & Greece for two outstanding shows in the fall of 2005.

The release of “Live in the UK” reflects the entire show held at Firefest in Nottingham, by the line-up featuring Christian, Wright, Cordola and Mary. A testament to a glorious line-up before HOUSE OF LORDS decided to move forward with new members with their successful new record “World Upside Down”.

A special studio track, “Havana” (written by Christian and Giuffria together with Tim Pierce and Mark Spiro – originally the Japan-only bonus track of “The Power & The Myth” album) has been added as a special gift to the fans. Enjoy !

“Live In The UK” includes the following tracks:
Sahara; Chains Of Love; Love Don’t Lie; Pleasure Palace; Talkin’ Bout Love; The Edge Of Your Life; Mind Trip; All Is Gone; The Rapture; I Wanna Be Loved; Can’t Find My Way Home; Slip Of The Tongue; Havana (studio bonus track).