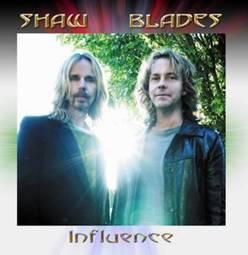 What happens with two of today’s most successful classic rockers join forces to create an album of songs that have been a source of inspiration for their respective multi-Platinum careers?

“Influence” is the duo’s first album since their recently re-released 1995 debut, “Hallucination”. Like the debut–and unlike their history-carving decades as icons in the more hard-rock minded Styx, Night Ranger and Damn Yankees–the latest release is rooted in acoustic guitar and organic production, harvesting a decade of musical influences into 11 tracks (on which Blades and Shaw played all the music except for drums and the occasional keyboards). With classics from the ’60s and ’70s including the Mamas and the Papas’ “California Dreamin’,” Buffalo Springfield’s “For What It’s Worth” and Steely Dan’s “Dirty Work,” “Influence” offers a track-by-track chronology of the musical era that helped define nowadays rock music.

Whether the songs are delivered in faithful tribute, as is the case with Simon & Garfunkel’s epic masterpiece “Sounds Of Silence,” or given a modern rock transfusion, as in the duo’s 1966 folk anthem “I Am A Rock,” the results are the same, sparkling like a beacon illuminating the mainstream roots of rock and roll’s formative years.

“I cringe at the thought of Paul Simon hearing our stuff,” laughs Blades, only half-jokingly. “I honor his spirit so much, and I’m such a huge fan. As far as I’m concerned, they invented the word genius to go along with him, and we just wanted to make sure that we did their songs justice. Tommy and I have that special symbiotic relationship that doesn’t come along a lot. Simon & Garfunkel also had it, we have a reverence to it, and it was something that we just wanted to dig into.”

“As writers, we’re like two old friends who finish each other’s sentences,” adds Shaw. “We became best friends as a result of the music and the experiences we’ve had because of it.”

But “Influence” isn’t about the experiences of SHAW / BLADES, it’s about the inspiration that helped create the experiences. “This album has been years in the making,” continues the Styx/Damn Yankees guitarist. “The recording process didn’t take years, but the concept had been looming in our conversations for a long time. We’d always sit around with a couple of guitars and play songs we both knew from or younger days, spontaneous harmonizing and all that, and we slowly eased into the idea of making this record.”

One of the most prolific duos in the history of hard rock, Shaw and Blades have sold more than 50 million albums amongst their three bands, scored 12 Top 10 singles on the Billboard “Hot 100” chart, debuted 16 albums in the Billboard “Top 200” albums chart, and share joint songwriting credits for the likes of Ozzy Osbourne, Aerosmith, Cher and Alice Cooper.

Even so, “Influence” offered the pair an invigorating musical freedom. “With Shaw / Blades,” offers Blades, “we’re able to take liberties that our respective bands couldn’t do. We need to be Styx-sounding, we need to fit in that Night Ranger world, and we even need to think about Damn Yankees, so that’s what’s fun about Shaw / Blades–we get to be our alter-egos when we want to be, yet we can truly be ourselves. We grew up singing harmonies and songs with massive vocals, so it’s a wonderful thing to have that freedom here. This was a complete labor of love.”

“You can always tell a brilliant song, whether it was written 30 years ago or yesterday,” says Blades. “Every song we picked is identifiable in its own right, and they’re all immediately recognizable. What does that tell you? That the songs are the stars. That’s what we wanted to do on this record, we wanted the songs to be the stars. I think that’s what we accomplished.”

SHAW / BLADES “Influence” will be released in Europe on February 16th 2007 with release in Japan scheduled on King Records.