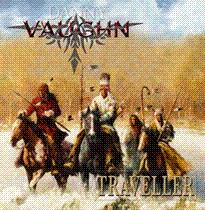 SOLO ALBUM FROM TYKETTO’S DANNY VAUGHN DUE IN FEBRUARY:

“Traveller is the best album of my career”, proudly states Danny Vaughn. And that’s quite a challenge if you consider the high calibre of his musical output over the years.

Coming out of nowhere, he became the lead singer of WAYSTED in 1986 and released the band’s most highly acclaimed album, “Save Your Prayers”. He learned his trade by opening up for IRON MAIDEN in stadiums and arenas around the world. From there, Danny formed the now legendary group, TYKETTO, in 1990 and released “Don’t Come Easy”, still regarded today as a benchmark in the Melodic Rock genre. Moving from strength to “Strength In Numbers” was a powerful follow up, but even with 150,000 albums sold, 3 videos and countless tours under his belt, the disappointing changes in the music industry in the mid 90’s soon led Danny to, unhappily, leave the band.

In 1999 Danny reunited with former TYKETTO companions: Michael Clayton Arbeeny and Jaimie Scott, to release two very well received albums, “Soldiers And Sailors On Riverside” and “Fearless”, under the band name VAUGHN. These were Danny’s songs, done in his own style and he was writing better than ever.

In 2003, Danny was approached by Frontiers Records with the idea of releasing a project-record more in the classic Melodic Rock vein, using songs from other writers as well as some of his own. Produced by Fabrizio Grossi, the album FROM THE INSIDE was heralded as a major triumph and a return to the style for which Danny is best known.

So, with all of that, and more to his credit, how could he be so confident in the new album, “Traveller”?

Best to hear it from the man himself: “After several meetings with Frontiers, we all agreed that my next album had to be not only a classic melodic sound, but also a step forward, and it had to be very special. By this time, I had done a couple of years of touring with an all English band, which featured a twin guitar attack, and much heavier sound than I had been known for before. This was well received by audiences all over the UK and Europe, so I had the task of working on songs that reflected that new, live attitude. The band, Tony Marshall (CONTAGIOUS) and Pat Heath (BRAVE NEW WORLD) on guitars, Steve McKenna (TEN) on bass and Lee Morris (PARADISE LOST) on drums, took up the challenge of not only recreating our on stage fire, but recording an album with a very layered and full production. So many of these songs allowed me, as singer, writer and producer to try a lot of ideas that I always had in mind and the result is a monster! While a ll the elements of my usual song writing style are there, there is much less of a reliance on acoustic instruments than on previous albums. Yes, there are still a couple of acoustic songs (it wouldn’t be me without them) but, the number of fast paced rockers is much higher than I have done before. I can’t wait to play these songs live as they are born to be performed on stage! Clocking in at an hour long, it has a little bit of everything that has come before, and some brand new ideas all in one package. It takes you from place to place, from mood to mood, seamlessly, and we are all extremely excited to have our fans hear it.”

“Traveller” is set for release on February 16th 2007 on Frontiers Records with a Japanese release to happen on King Records.

Final tracklisting of the album will include the following songs: Miracle Days; Badlands Rain; Traveller; Restless Blood; That’s What She Says; The Touch of Your Hand; Lifted; The Warrior’s Way; The Measure of a Man; Think of Me In The Fall; Death of The Tiger; Better By Far.

Under the new name, “DANNY VAUGHN”, the new line-up recently played a storming performance at the UNITED FORCES OF ROCK Festival in Ludwigsburg, Germany in October 2006 and introduced 3 of the new songs to a wildly receptive audience. Judging by the crowd’s reaction, and the reaction of the 30 or so journalists that got a 5 song sneak preview before the show, this album is going to be on a lot of people’s “Best of” list for 2007. Watch out for DANNY VAUGHN live, to come crashing into a town near you !